Address of the offices in Brignoles 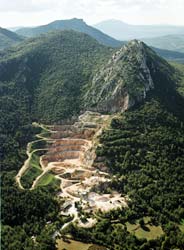 The Candelon quarry is located 3 km south-west of Brignoles. It can be reached from the D-road (départementale) 554, by a tarmac track of approximately 500 m to the west of the road.

(Excerpts of reviews from the “Mausolée”) At the Candelon site (meaning candle, no doubt because of its shape) a yellow dolomitic limestone and a pink marble can be found.

The dolomites and the marble are separated by a fault, and the marble formation is folded. The Candelon quarry was worked during the Gallo Roman era and developed by Cantini around 1860/1870; it was remodelled in 1891 by Marbres Français.

There were several quarries in the hillside. According to the geologist Dumon, the substance sought was probably the ‘Petit Cristallisé’(*) that is a fault breccia in contact with the fault between dolomite and marble. Around 1925, a more yellow marble was still extracted as it was the most highly-demanded at the time.

However, this yellow marble contained some violet that was sometimes less in demand.
It was then discovered that, higher up, the deposit was more homogeneous. A second level was thus created. The blocks were brought down from the top to the bottom level by a rail on the ground. A system of tracks and trolleys manoeuvred by cable and hoist was subsequently used from 1927 to 1960. It was initially a system built of salvaged materials without a hoist used as a braking system to descend the blocks without any engine.

This system was in fact described in literature from the last century:

A loaded trolley descends an inclined plane; the cable is wound around a drum (several times); at the other end of this cable there is another trolley that travels up. This is a wagon tilter; the trolley loaded with blocks pulls up a trolley that is either empty, loaded with cutting sand, jacks, etc. but the drum drives a mill whose blades cause a braking action conversely to the effect of a windmill.
This system was therefore used to descend the blocks and pull up loads of sand, wire, etc.

There was no motor and it could not be used for extraction purposes. We therefore had to purchase another one.

The production of the Rosé quarry was more popular with major American buyers and foreigners in general. At the Rosé quarry, the extraction had been done by Varate (plural of the Italian word Varata).

(*): Clearly breccia marble found at the base of the formation of the

A Varate is a mass of rock that is 20 to 40 metres in height, approximately the same width and several decametres thick. The base is freed first; very often, a spiral cutting thread is used to cut out an angle block of 4 m and more on the outside and a few decimetres on the inside over a length of approximately 20 metres. Once cut, this corner is removed using powder or extracted in blocks if possible.

Behind it, using the natural breaks, the surface around the block to be removed is freed. We then start by blasting a shaft, preferably in a poor, fractured rock. When this shaft is done, it is loaded with black powder and the huge block is thus turned over.

The yield of the rock was approximately 5%: thus, to produce 5 m3 of merchant blocks, 100 m3 of rock had to be broken away.

Once it had fallen, the mass would break at the natural cracks and was cut up using spiral thread and wedges.

When the yield became less than 5% we would lose money.

There were other marble quarries in the Candelon mountain at an almost summital level (around 600 m) where Oscar Daffe opened a quarry around 1952.

The quarry was even more difficult to work than the quarry of the Marbres français and the water supply was irregular. Few blocks were produced there. They were knocked down from the top of the quarry plateau to a valley. The geological level was the same.

Between the Candelon Rock and the Château de la Celle there was also a quarry that was run by various people including one of the Daffes. It was worked in 1930 and stagnated from 1930 to 1940. Although taken over after 1950 it was never very major.

A larger quarry did exist in the hill to the west of La Celle in the white coral limestone of the Jurassic.

The deposit produced two varieties of a marble very well-known in France and also long appreciated overseas: the Rosé and the Yellow of Brignoles.

In the lower quarry, near the crushing house, only the rock is now exploited to produce aggregates.

In the upper quarry, the exploitation has cut into the rock with a roughly triangular profile reaching 70 metres in height.

At the base of this incision, the main extraction location is a horizontal bank, revealing an impressive mass with its upper face cut with a thread.

This 7-metre-high bank was worked by a combination of rock cutting and blasting.

From two descent columns, the cutting installation fitted with a cable 1,600 metres long made two cuts: one vertical parallel to the initial incision and the other horizontal at the base of the mass.

The latter therefore being well cleared over a surface of some 200 m2, it was broken by successive blasts using black powder placed in the natural faults of the deposit.

The detached masses were then cleared and sorted: the blocks were taken to the nearby spiral thread cutting site; the small blocks intended to be cut into plates were sent to the plant in Saint-Maximin; the rubble was taken down to the crushing station at the foot of the mount.

The quarry’s cutting site, set up on a lateral platform, consisted of four wire cutting devices used solely to square the blocks of marble.

Two of these devices worked with sand (descent of 15 cm / hour approximately) and the other two -including one Pelecq supplied by a pump of the same make- cut with silicon carbide (descent of 70 cm / hour on average).

The more or less shapeless masses resulting from the extraction were cut on all 6 sides to produce perfectly parallelepipedal blocks of 1.5 m3 on average.

The marble production of this quarry was 500 m3 per year shipped within France and particularly to Italy, the U.S.A., and to Japan.

In addition to the 30-tonne Derrick serving the block depot, the quarry had two motor vehicles the power, driveability and mobility of which was greatly appreciated. One was a Caterpillar loader and the other a fork-lift truck that could load and carry masses of up to 25 tonnes.

The entire site was supplied with water by a reservoir located above the quarry, itself supplied by the pumping station installed at the foot of the mount.

On the platform of the lower quarry, the successive blasts extracted thousands of tonnes of rocks to be crushed each year.

A second Caterpillar loader incessantly went back and forth between the bottom of the face and the reception hopper of the nearby crusher house.

The house consisted of a pre-crushing station, with a primary crusher, a screen, and two conveyors, one for the overflow intended for backfill and the other for the product. This product was poured into a reception hopper which, by means of a new slow conveyor to facilitate manual sorting, fed the secondary crusher accessed directly by the trucks for pick-up.

This house produced the entire range of powders and aggregates from the triple zero (dust) up to the no.10 (flakes) in the three colours of marble extracted: light red, yellow and the Brignoles pink.

150 tonnes of aggregates were produced every day, i.e. approximately 30,000 tonnes per annum.

On top of the various productions already mentioned (marble blocks, small blocks for cutting, aggregates and powders), the Candélon quarry also produced, depending on the sorting, crusher-run blocks and stones cut on one side, both sold by the tonne.

By Prefectoral by-law of 18/04/1972, the company PROVENÇALE DE TRAVAUX whose head office was in Brignoles, was authorised to continue working the Candelon quarry.

By by-law of 20/09/1979, the Prefect of the Var suspended work in the so-called upper part of the quarry, “until a new extraction method is defined”.

At the same time, by a by-law dated 26 September 1979, Provençale de Travaux was authorised to continue working the lower quarry. This decision was amended on 31/08/1989, as the company had become PROVENCALE SA

ata for the calculation of the financial guarantees were furnished on 25/02/1999.

A order of the Prefect updating the previous provisions and taking the above-mentioned changes into account, was issued on 30/06/1999 (additional requirements).

All in all, the maximum annual production will remain unchanged at 150,000 t/year with a yearly average in the order of 35,000 t/year over 15 years, which enables us to adjust the rate of extraction to market demand.

In addition to current installations,

We have no plans at the moment to change the way the lower quarry is worked:

What is new is that we will be resuming work on the upper quarry to extract blocks of marble by undercutting. This project reduces disturbance by decreasing the amounts of explosives used and by reusing waste from the blocks.